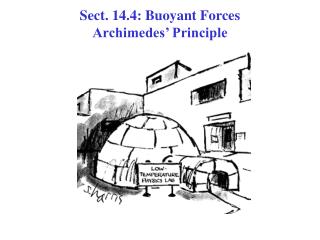 Sect. 14.4: Buoyant Forces Archimedes’ Principle. Experimental facts: 1. Objects submerged (or partially submerged) in a fluid APPEAR to “weigh” less than in air. 2. When placed in a fluid, many objects float! Both are examples of BUOYANCY. Buoyant Force and Archimedes Principle - . physics february 17/21. pressure review. what affects the pressure of a

Section 10.5 The Kinetic Molecular Theory - . in this section… gases and gas l aws on the molecular scale molecular

LEQ: What are the differences among solid, liquids, gases, and plasmas? - . pre-read chapter 16 section 1 write 3

Buoyant force - . buoyant force and fluid pressure. imagine that you have a glass of ice water in front of you. take

32.1 Electrical Forces and Charges - Electrostatics involves electric charges, the forces between them, and their

Archimedes - . 2000 years ahead of his time. “dr. bob” gardner (with assistance from jessie deering) etsu, department