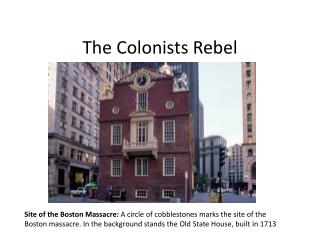 The Colonists Rebel. Site of the Boston Massacre: A circle of cobblestones marks the site of the Boston massacre. In the background stands the Old State House, built in 1713. Primary & Secondary Sources.

The Boston Massacre - . true massacre?. massacre: the act or an instance of killing a number of usually helpless or

Ch. 4: The American Revolution 1765-1783 - . what caused the colonists to rebel against the british?. colonists

Boston Massacre and Tea Party - . colonists very upset with british. news of the protests got to parliament! british

PATRIOTS VS LOYALISTS - . taxation. the colonists should help pay great britain for the french and indian war debt. “no

Why do you think the colonists felt it was necessary to write down these plans? - . it made them more accountable. gave

Chapter 4: The American Revolution - . section 1: the stirrings of rebellion. section goals. origins (causes) why did the

The American Revolution - . give me liberty or give me…just give me the liberty!. the rights of an english colonist.

Birth of the American Republic - . by: gabby shadeed. britain becomes a global power. there are several key reasons for

American Revolution 1760-1791 - . causes and effects. what is a revolution?. a revolution is an overthrow or replacement

The Boston Tea Party - . turning point towards rebellion?. just how much is enough to force someone to rebel? provide at

The Boston Tea Party - . what was a committee of correspondence?. groups formed by the colonists to help connect and

Townshend Acts - . charles townshend – thought colonists bad behavior made it important to have an army in colonies

Developments in 1765 made many colonists even more nervous about Parliament’s authority. - A series of new taxes and