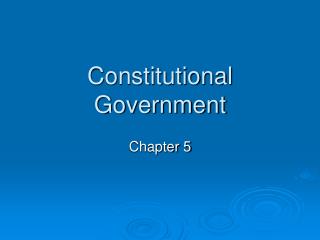 Constitutional Government. Chapter 5. What does a constitution do?. Constitutes a regime Limits the powers of government Provides the ground rules for how government operates.

AP Government Review - . unit 1 constitutional underpinnings. goals of the us constitution. create a strong union of

WHAT WERE THE AIMS OF EACH PIECE OF LEGISLATION OR CONSTITUTIONAL AMENDMENT - . federal trade act set up federal trade

Basic Criminal &amp; Constitutional Law: The Court System - . ps-ilj-4. students will analyze the structure of the

Unit 1 Historical and Philosophical Foundations of American Government - . essential question. what are the philosophical