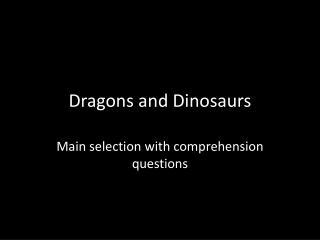 Dinosaurs or Dragons ? - . did dinosaurs really go extinct 65 million years ago? or …. are some dinos still alive today

DRAGONS - . story of dragons dragons are known as a legend or myth but some people think they could still be alive.

Dragons - . introduction. there are lots of different kinds of dragons. from cruel and vile to cunning and majestic.

Dinosaurs - . slide menu . objectives. objectives. 1. after going through the powerpoint on dinosaurs, students will be

Dinosaurs - . by rammeja and simran. tarbosaurus. how do i pronounce tarbosaurus? tar-bow-sore-use what does the name

dinosaurs - . tyrannosaurus rex. they lived in the late cretaceous period, approximately between 68 and 65 million years.

Dinosaurs - . why study dinosaurs? “dinosaurs are not mentioned in the bible!” a living dinosaur! did humanity and