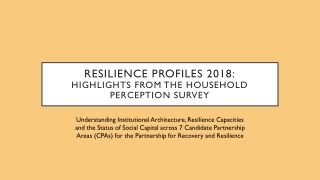 Resilience profiles 2018: Highlights from the household perception survey. Understanding Institutional Architecture, Resilience Capacities and the Status of Social Capital across 7 Candidate Partnership Areas (CPAs) for the Partnership for Recovery and Resilience. Introduction.