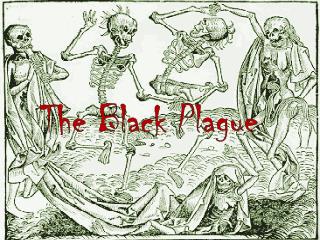 The Black Plague. In the early 1330s an outbreak of deadly bubonic plague occurred in China. The bubonic plague mainly affects rodents, but fleas can transmit the disease to people. . The Black Plague - . by: brian german and jennifer gaudet. the cause of the

The Black Plague - . by: ryan tang and cameron cuzmanko. general information. one of the most deadly diseases in

Black Plague - . by: alex diep, jessica smith, and kathryn smith. table of contents. what is it? where did it spread? how

The Plague Black Death- Bubonic Plague - . where did it come from?. first seen in china (under mongols) in early 1330s. .

The Plague Black Death- Bubonic Plague - . spread of the plague. where did it come from?. first seen in china (under

The Plague (Black Death) - . the victims “ate lunch with their friend and dinner with their ancestors in paradise.”

BUBONIC PLAGUE: the Black Death - . margaux escutin nwakaego ogunnaya. purpose of the project. to see how rats and fleas