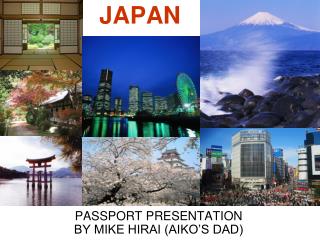 JAPAN. PASSPORT PRESENTATION BY MIKE HIRAI (AIKO’S DAD). This is the Japanese Flag. It represents the “RISING SUN”. This is a map of Japan. Japan is part of the Asian continent. Japan is between the Sea of Japan & the Pacific Ocean Japan is about 4900 miles from Bellevue, WA.