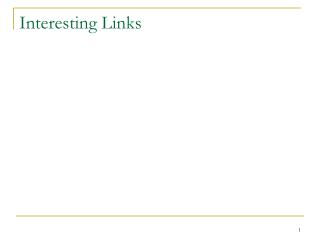 Interesting Links. On the Self-Similar Nature of Ethernet Traffic Will E. Leland, Walter Willinger and Daniel V. Wilson BELLCORE Murad S. Taqqu BU. Analysis and Prediction of the Dynamic Behavior of Applications, Hosts, and Networks. Overview. What is Self Similarity?

DISCOVERING AN INTERESTING PAINTER - . creating your power point. your task will be to create a powerpoint presentation

Assignment #1 - . setup a course homepage , which includes 1. something about you, 2. your view of software engineering (

Interesting Case 1 - . october 2012. interesting case 1. view the following cytology images and then think about your

Links - Software tools. links. links. a link is a pointer to a file. in fact, in unix all filenames are just links to a

Learning Report Styling Links - . mark purcell. purpose. links are something that will be all over your website. they are

Clinical Examination of the Respiratory system - Anything interesting?. seen any interesting patients in past week?why