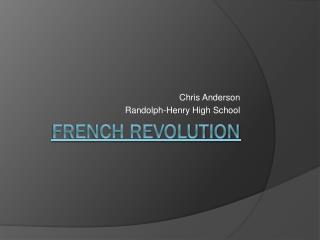 Chris Anderson Randolph-Henry High School. French Revolution. Introduction. France will reach its height during the same time as the American Revolution French leaders wer e very rich Most of the people of France were not rich--instead, the people had very few rights

The Industrial Revolution - . industrial england: &quot;workshop of the world&quot;. that nation of shopkeepers!