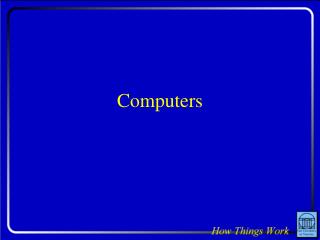 Computers. Question:. Today, the fastest PCs run at roughly 1.5 GHz. Someday, computers may run at 1,000,000 GHz. Compared to present computers, those high-speed ones would have to be much larger. much smaller. about the same size. Observations About Computers.

E-Business Eighth Edition - . chapter 10 e-business security. learning objectives. in this chapter, you will learn about:

Chapter 3 Data Representation - . data and computers. computers are multimedia devices, dealing with many categories of

Chapter 1 Introduction to Computers, the Internet and the Web - . java™ how to program, 8/e. 1.1   introduction. the

CISC 150 Introduction to Computers - Our objectives are: describe the major components and their interrelationships