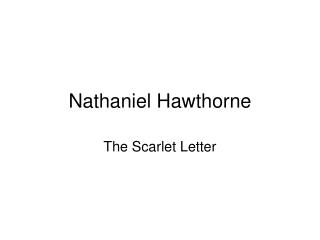 Photography and the Civil War - . images of war before the civil war. winfield scott at battle of veracruz by nathaniel

ELTON MAYO THE HAWTHORNE STUDIES - . studies carried out at the hawthorne plant of the western electric company in

“The Birthmark” - . woah ! did you see that? that was amazing!. nathaniel hawthorne. family history. his

The Birthmark - . by nathaniel hawthorne. the birthmark was nature’s flaw , but what nature could not perfect, science

Nathaniel Hawthorne - . persecution within puritan community witchcraft trials in the 17 th century were a deeply