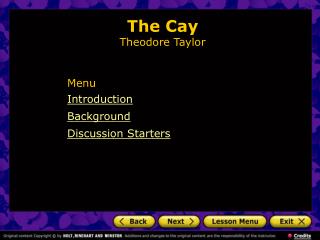 The Cay - . by theodore taylor. setting. time: 1940’s. in wwii oil was an important resource. crude oil was refined

Our 12 th President: Zachary Taylor - . damein lee. jobs before the presidency. zachary taylor was born to a wealthy

Theodore bilbo - . theodore bilbo. bilbo was involved in many scandals and accounts of voting fraud. even with all the

The Cay by Theodore Taylor Test Review - . 1. what was mr. enright’s job? 2. how did phillip feel when timothy left him

Elizabeth Taylor - . by: bess freeman. family. my name is elizabeth taylor. i was born at heathwood , a suburb of

Theodore Roosevelt - . “the joy of living is his who has the heart to demand it.” theodore “THE CAY” - . featuring the calypso music: “real situation” by bob marley &amp; the wailers. where is curacao