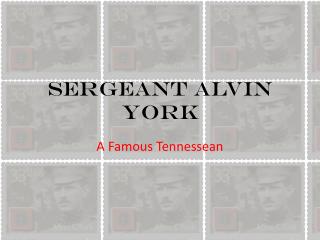 Sergeant Alvin York. A Famous Tennessean. What is a Sergeant?. In the United States army, a sergeant is a leader of a military group. World War I. A world war is a war which effects most of the world’s most powerful counties and population. New York's Caribbean street party - The j'ouvert party is followed by the west indian day parade, which attracts some one

Curtain – on phone - Hello… sergeant foley? … may i speak to inspector levine, please. oh? do you know where he is?

ALVIN AILEY KIDS - . and a little symphony. vocabulary. students one who studies. perform act, sing, or play in public.