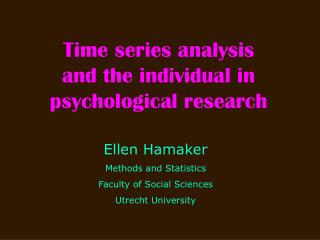 Time series analysis and the individual in psychological research

Time series analysis and the individual in psychological research

SOCIAL &amp; ENVIRONMENTAL pSYCHOLOGY (FEM 3103) - . what is your reaction?. heard your housemate was caught because

Introduction to Social Analysis - . week 4, symbolic interactions: what do people do when they interact?

Intro to Research Methods in Psychology - . please read chapters 4 and 5 in martin. major topics. research -- what it is.

Approaches to Psychology - . different ways of explaining human behavior or why do we do the things we do?.