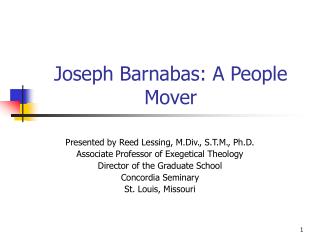 Encouragement In Action - Barnabas - . barnabas – the one called son of encouragement. introduction. new testament has

Business Mover - The moving process can be frustrating for many reasons. finding a local colorado moving company that is

BIG Mover - . stuff for the professionals. loading platform with about 200 wheels. i am going by road, okay ?. three

Barnabas, Son of Encouragement - . discouragement: “to cause someone to lose confidence or enthusiasm.”. those who

Barnabas - . first mentioned in acts 4:32-37 joseph was a levite from cyprus apostles nicknamed him barnabas “ son of

St Barnabas - . ejjcls charity. tip: it is best to watch this presentation on slide show mode. why we chose this

Being a Thinking Mover! - . o&amp;m is about. encouraging the student to want to move want to engage want to master