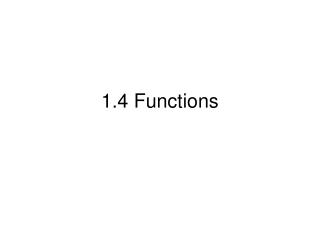 1.4 Functions. Objective. Determine whether relations between two variables are functions Use function notation and evaluate functions. Find the domains of functions. Use functions to model and solve real-life problems. Evaluate difference quotients. Definition of a Function.

Section 1.4 Transformations and Operations on Functions - . given the graph of the function f(x):. f(x) + c is a vertical

Section 1.4: Continuity and One-Sided Limits - . example. use the graph of t ( x ) to determine the intervals on which

Graphing Linear Relations and Functions - . objectives: understand, draw, and determine if a relation is a function.

1.4 The Derivatives of Some Basic Functions - . the derivative function represents the slope of the tangent at each point

EX) Sketch the Piecewise-Defined Function BY HAND - A piecewise-defined function is:. a function defined in pieces for

Inverse Functions - . objectives. students will be able to find inverse functions and verify that two functions are

Section 1.4 - . definition of continuity. continuity at a point: a function f is continuous at c if the following three

1.4c Inverse Relations and Inverse Functions - . definition: inverse relation. the ordered pair ( a , b ) is in a