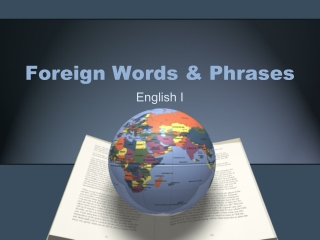 Foreign Words & Phrases. English I. Ad nauseam. Add NOZZ- ee -um (Latin) to an extreme or annoying extent. Alma mater. ALL- muh MA- turr (Latin) - the school, college, or university that somebody formerly attended; a song used as the anthem of a school, college, or Lesson 3 Planning Performance - . performance management is a collaborative effort between supervisors and employees.

Fluency Phrases for Second and Third Grade - Why practice phrases?. these phrases contain the first 100 words from the

Confused and Misused Words and Phrases - . dude, the right word is affect , with an a. no, you’re wrong. the word

Fun with “Foreign Phrases” - . déjà vu: the illusion of experiencing something before (n) faux pas: a slip in

Commonly Used Foreign Words and Phrases - . word definitions example of use parts of speech word origins. why should we

Foreign Words and Phrases - . 1. alma mater : a school, college, or university which one has attended or from which one