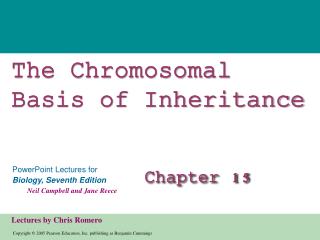 Chapter 15. The Chromosomal Basis of Inheritance. Figure 15.1. Overview: Locating Genes on Chromosomes Genes Are located on chromosomes Can be visualized using certain techniques. Concept 15.1: Mendelian inheritance has its physical basis in the behavior of chromosomes