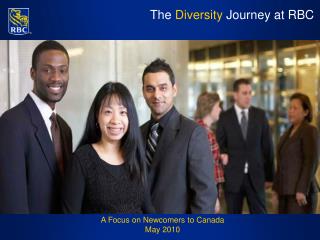 The Diversity Journey at RBC. A Focus on Newcomers to Canada May 2010. About RBC. Founded in 1869 Global organization with 18 million clients and over 80,000 employees worldwide , who speak over 100 languages Beyond Diversity: Continuing the Journey - . administrative and supervisory meeting december 2, 2010. goals. as

Diversity at the Table - . chapter #2. learning targets. 5. explain culture and its relationship to food. 6. summarize

Diversity at the Table - . how food affects life. what is culture. a set of customs, traditions, and beliefs shared by a

RBC - . what is blood made up of?   an adult human has about 4–6 liters of blood circulating in the body. among other

The Diversity Climate at UVM - . an institutional and personal look at diversity and issues around race at the university

RBC-AMT32E With RBC-SMT1 Control - . the on/off button on the remote controller will function all the time regardless of

RBC TRAINING - Objectives . understand the timeline and critical dates regarding the implementation of the new rbc

The Journey at New Pueblo Medicine - . mike cracovaner, ceo. patient-centered medical home … a journey not a