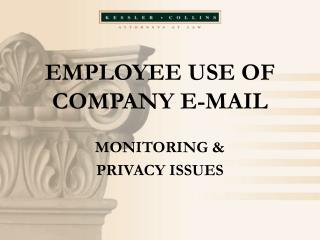 EMPLOYEE USE OF COMPANY E-MAIL EMPLOYEE USE OF COMPANY E-MAIL. MONITORING & PRIVACY ISSUES. TECHNOLOGY ISSUES-OF-THE-DAY. 80s – Proliferation of the PC 90s – Internet 00s – Privacy in the workplace. PRIVACY IN THE WORKPLACE: THE ISSUE. Has the attention of the U.S.’s largest corporations

EMPLOYEE USE OF COMPANY E-MAIL Computers in Business and Industry - . introduction. computer technology has changed every aspect of business and

Blogging and Your Company - . employee blogs: how a corporation can get its employees blogging and why it should.

Employee Benefits - . the challenges of human resources management. chapter objectives after studying this chapter, you Janus clauses For Employees Handbook - . publicis groupe is our “ mo ther company”. you will find in this section the

Chapter 4 Employee Rights and Discipline - . introduction. employee rights have become one of the more important human

E-MAIL ETIQUETTES - . “email - when it absolutely positively has to get lost at the speed of light.”. need of e-mail

New Frontiers in Employee Communications: How Leading Organizations are Using Social Media to Engage Employees - . the

Employee Rights &amp; Responsibilities - . module 6. how to deal with employee complaints. exercise. everyone get up

Employee Rights and Discipline - . the challenges of human resources management. chapter objectives after studying this