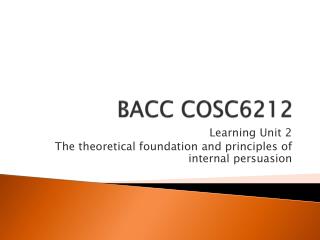 BACC COSC6212. Learning Unit 2 The theoretical foundation and principles of internal persuasion. The link between persuasion and motivation (De Wet 2913:40).

Can You Be Persuaded? - . the art of rhetoric. think about this…. are you strong minded or are you easily swayed? what

Mass Media and Public Opinion - . chapter 8. what is public opinion?. those attitudes held by a significant number of