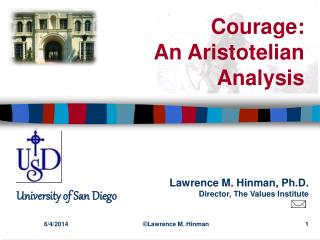 Courage: An Aristotelian Analysis. Introduction. We have seen a great increase in books, movies, and documentaries about courage recently. Stephen Ambrose has documented stunning cases of unparalleled courage in his books, especially Undaunted Courage and Band of Brothers . Circle of Courage - . based on “reclaiming youth at risk”, by larry k. brendtro-martin brokenleg-steve van bockern

www.YaleRuddCenter.org - Dealing with obesity do we have the courage?. www.yaleruddcenter.org. podcasts. enewsletter.

“All our dreams can come true, if we have the courage to pursue them” - . muhammad ali.