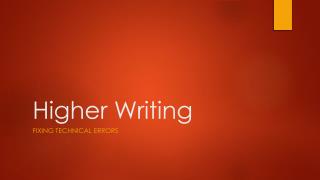 Archaeology proves the Higher Critics wrong - . glenfield study evening 19 october 2013. the higher critics. who or what

Using the Writing Studio to Extend and Enhance the Environment of Your Writing Class - . telecoop 2007. who am i?. jill

Clinical Writing for Interventional Cardiologists - . what you will learn - hopefully!. introduction general principles

Effective Writing - . why write in the content areas? isn’t that the english teacher’s job?. writing: a powerful