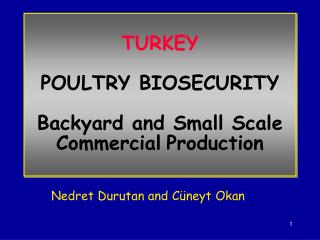 Poultry Biosecurity - . what is biosecurity?. biosecurity: addresses measures that should be taken to keep any

Small-Scale Livestock Production Raising Poultry for Profit - . this program was funded by the usda national institute

Small-Scale Biodiesel Production - Energy overview where does our energy come from? 85% from fossil fuels coal, crude

Small-Scale Poultry Stunning By Akrum Hamdy - . poultry are not included in humane slaughter act however, birds should be

a youth association in Gaziantep -TURKEY - . information about turkey. capital city is ankara the biggest city is