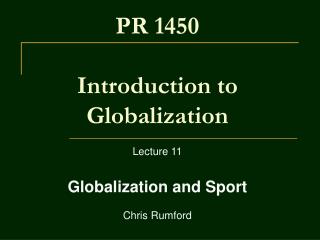 Chapter 33 Globalization in the New Millennium - . ap world history. i. global political economies. a. the spread of

1. Globalization - . the linking of nations through trade , information, technologies, and communication . this often

Sovereignty and Globalization - . introduction - scenario. imagine you are married with 2 children and you own your own

Globalization, Global Inequality, and Culture - . review. a tour of globalization and its impact on the united states….