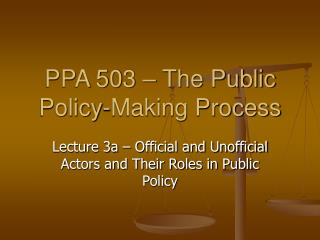 The Policy-Making Process - . esd 11 december 8, 2000. history of the issue. policies and methods of analysis. stake-

PPA 503 – The Public Policy-Making Process - . lecture 1 – the study and practice of public policy. introduction. the

The Public Policy Process - . week 9: policy types. some reminders. i will get your agenda memos back asap then i will

An Introduction to Public Policy - . chapter 1 dr. khaled f. sherif instructor. what is the public policy process?. the

Lecture No 22 STEPS OF PUBLIC POLICY MAKING - . deciding on the strategy will be determined by. methods of policy

PPA 503 – The Public Policy Making Process - . lecture 7c – how to ask for action or propose policy on behalf of a

SPIDA, June 7, 2004 Making sense to policy-making: - Some research examples from the intersection of labour market

Who Is In Charge Here, Anyway? - Public policy, advocacy, and weighing in: participating in the creation of child and