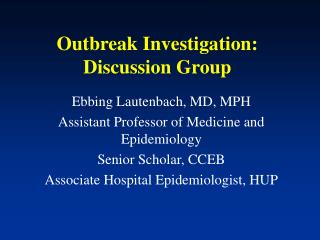 Gimli Glider Incident Investigation - . by lee xuan hong. overview. in this investigation, we will find out what the

OUTBREAK! - . portrait of an epidemic. http://phil.cdc.gov/phil/details.asp. the black death. 25 million dead over 5

Outbreak Communications - . learning objectives. at the end of the presentation, participants should be able to: explain