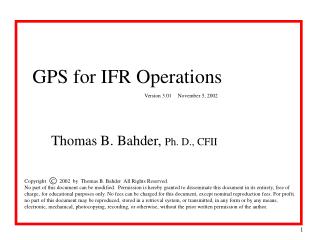 Air Traffic Control - . definition - atc is a service provided by an appropriate agency to promote the safe, orderly, and

Awareness of the Anatomy and Physiology of the Human Body - . how can we survive?. how do the parts of living things

Global Positioning System - . what pilot/students need to know!. gps generally. the gps is a u.s. satellite based radio