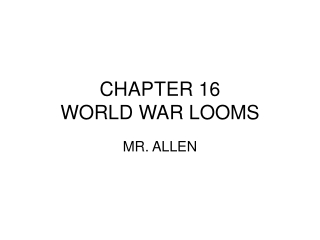 CHAPTER 16 WORLD WAR LOOMS. MR. ALLEN. The rise of rulers with total power in Europe and Asia led to WW2 Dictators of the 30s and 40s have made world leaders especially watchful for the actions of dictators today. SECTION 16.1 DICTATORS THREATEN WORLD PEACE.

World War 2 - . what were the dates for ww2. world war two began in september 1939 when britain and france declared war

World War II: Normandy - . lesson 18. operation overlord. at the trident conference the allies had agreed to plan for a