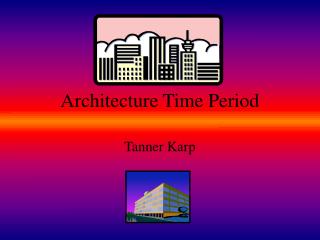 Architecture Time Period Tanner Karp 10000 BC-3001 BC Neolithic Architecture Neolithic architecture was said to have started in southwest Asia. Used mud-brick to build house and villages. Houses were plastered and painted with pictures of animals.

World History Through Architecture and Art - . ancient egypt. the theme of egyptian architecture is: the focus on the

Medieval Art and Architecture - . questions. what is art? what is architecture?. art. medieval art reflected many

ARCHITECTURE IN HOUSES - . by noah. plank

Gothic Architecture: the Cathedrals - . the height of middle age religion. what is ‘gothic’

CHAPTER 3 - . principles of money-time relationships. money. medium of exchange -- means of payment for goods or