Design your own coat of arms - PowerPoint PPT Presentation 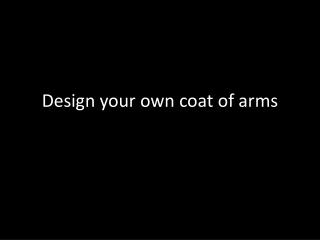 Design your own coat of arms

Design your own coat of arms. Medieval Times. Medieval Times-Middle Ages-Dark Ages, many terms have been used to describe this period spanning more than a thousand years. Church. The Church was very much in control of the gamut of medieval life. Technology.

Design your own coat of arms Time Traveler: Coat of Arms - . a coat of arms is used to represent a person or a group of people, such as a family.

The Emblems of Canada - . canada – the name. in 1535, explorer jacques cartier heard the word “kanata”. it was used

Family Crest &amp; Coat of Arms - . romeo &amp; juliet has a lot to do with family identity &amp; loyalty. in

Cornish Heraldry - . representing identity!. what is heraldry ?. heraldry is the profession, study or art of granting,

Coat of Arms - . lines and color. colors. every color has a significance. when choosing a color for your coat of arms

Build your own FFA emblem! - . target: review the ffa emblem and all of its components. directions. do not consume your

Coats of Arms and Heraldry - . heraldry includes a family motto and a family coat of arms. a herald is the person hired

Heraldry - . 6 th grade. what is heraldry. heraldry is the practice of designing, displaying, describing, and recording

Coat of Arms- symbolism - . tiffany liu. parts of the coat of arms. elements of a coat of arms shield: the colors and

Heraldry Project - . design 2 / fall 2013. background. the origins of heraldry lie in the need to distinguish

Heraldry - . is your ancestry important to you? why?. heraldry. includes a family motto and a family coat of arms-used to

Safe In His Arms - . my soul in sad exile was out on life’s sea so burdened with sin and distressed. till i heard a

Medieval Coats-of-Arms - . heraldic terms, rules of tincture and blazonry. by the end of this lesson students will be

Day 2 part 2 - . self and identity. the main idea: helping children towards an understanding of self and personal