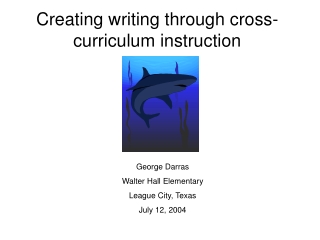 Transforming Writing Instruction through Blogging - . analysis of a class blog. goals of the class. collaborative

Curriculum and Instruction - Department of mathematics and science. network: 8n8 network key: beourguest !! then open a

Curriculum/Instruction/Assessment - . consider performance based assessments. do not forget to use the standards – you