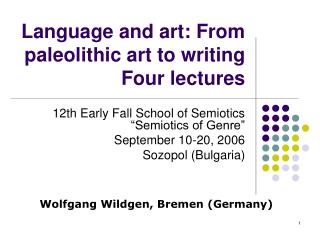 Egyptian Art and Writing - . the rosetta stone. in 1799, napoleon took a small troop of scholars, linguists and artists

Gujarat language and art - Gujarat has a huge diverse base of culture. it is influenced and developed with the members of

Language of Art - . symbol: something that stands for, or represents something else. in the spoken language, symbols are

THE VISUAL LANGUAGE OF ART – HOW ART COMMUNICATES TO US (Art and its Appearance) - . the three languages of art. henry

The Art of writing - . sonnets. sonnet. a 14 line lyric poem with a single theme usually written in iambic pentameter

THE ART OF WRITING - . with photography virtual fieldtrip to appalachian state. a picture is worth a thousand words .!.