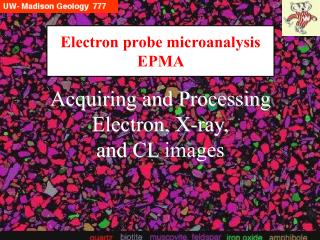 Electron probe microanalysis EPMA. Acquiring and Processing Electron, X-ray, and CL images. What’s the point?. “A picture is worth a thousand words”. The more we know about how images are acquired and processed, the better we can present research results graphically.

X-ray Microanalysis - . the fluorescent production of x-rays by electrons is one of the most important interactions

Electron probe microanalysis - . accuracy and precision in epma: the role of standards. revised 03/26/12. what ’ s the