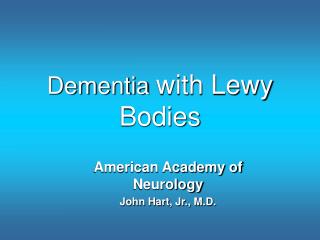 Dementia with Lewy Bodies: What is it and how do I treat it ? - . james b. leverenz, m.d. departments of neurology and

Dementia - . what is dementia?. dementia is a gradual decline of mental ability that affects your intellectual and social

Dementia - . by jen, natalie and keith. what is dementia?. dementia isn’t just one thing but around more than 100

Dementia overview - . mr. chris webb. overview. dementia is a common condition. in england there are currently 570,000

Non-Alzheimer’s Dementia: What you need to know about Lewy body, frontotemporal, and vascular dementias - . james b.