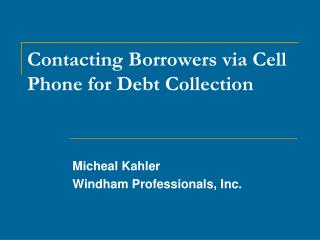 Contacting Borrowers via Cell Phone for Debt Collection Micheal Kahler Windham Professionals, Inc. Our Discussion Today Communication Laws Telephone Consumer Protection Act What is Creating Our Problem Today The Affect on the Student Loan Collection Industry What We Can Do

How to conserve your cell phone’s battery? - Cell phones have become an integral part of today’s life and we can’t

Chapter 14: Audit of the Sales and Collection Cycle: Tests of Controls - . typical transactions in the sales and

Chapter 6 - . a tour of the cell. overview: the importance of cells. all organisms are made of cells the cell is the

HIDDEN ACTIVE CELL PHONE DETECTOR - . introduction. the main scope of project is to sense the presence of an activated

Keeping it Real Behind the Wheel - . your name here title agency. “to do two things at once is to do neither.”.