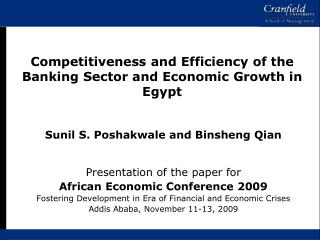 Competitiveness and Efficiency of the Banking Sector and Economic Growth in Egypt Sunil S. Poshakwale and Binsheng Qian Presentation of the paper for African Economic Conference 2009 Fostering Development in Era of Financial and Economic Crises Addis Ababa, November 11-13, 2009

To Grow or Not to Grow: That is the Question - . thorvaldur gylfason. outline. pictures of growth determinants of growth

MACROECONOMICS - . unit of analysis: economy as a whole variables of interest: level of economic activity, unemployment,

Money, Banking and the Financial Sector - . chapter 13. laugher curve . a central banker walks into a pizzeria to order

Raising Happiness in Poorer Countries: Will Economic Growth Do the Job? - . richard a. easterlin october 2011. (with help

Introduction - The use of technology to improve competitiveness of smes in the agribusiness sector dr. andré gordon