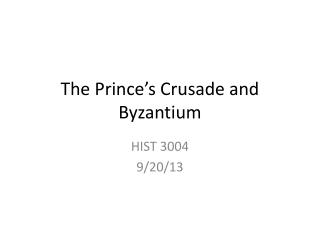 Byzantium - . chapter 7: outline the decline of rome literature and philosophy augustine of hippo boethius the ascendancy

Albigensian Crusade - . by amy steenbergen and cody witt. what was

The Fourth Crusade - . by: vishu vyravipillai his 101. definition. a military expedition to recover the holy land

Machiavelli and The Prince - . your midterms. congrats to those who did well! common

The Prince and the Pauper: - . movement of children up and down the canadian income distribution. peter burton and

Byzantium - . the eastern legacy of the roman empire. byzantium. barbarians are now the western masters military

Byzantium and the World - . byzantine empire between large empires in europe and asia. large struggle with persians

Byzantium the New Rome - . world history. old roman empire. western roman empire crumbled in the 5 th century as it was

The Commonwealth of Byzantium - . questions to consider as you work through this chapter. how did the byzantine empire