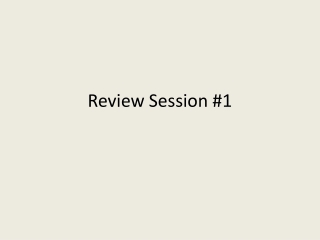 REVIEW SESSION - . or the whole of psychology in under 90 minutes. higher level cognition. availability

Review Session - . saturday, 3 pm ph 104. figure 25-17 problems in the oxidation of unsaturated fatty acids and their

Review session - . in this lecture we will review the major models that we have developed in the course. this course has