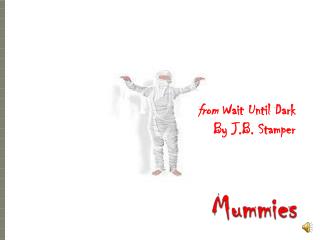 Mummies. f rom Wait Until Dark By J.B. Stamper. It had sounded like such a good idea-staying overnight in the museum. But now Robbie wasn’t sure. He was curled up inside his sleeping bag, right beside a cold, hard column that held up a big stone lion. Luke Mummies - . what are they really ?. what do we know about mummies?. mummy facts. when a body is mummified, it is