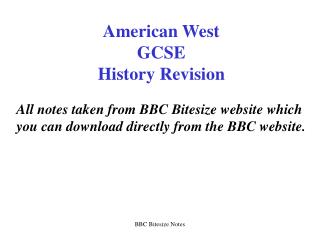 American West GCSE History Revision. All notes taken from BBC Bitesize website which you can download directly from the BBC website. The development of cattle ranching. Cowboys and cattle ranchers were the first group of European settlers to move permanently onto the Great GCSE History Revision Activities - . use your notes and textbooks to complete these revision mind maps. test yourself

The American West – Revision - . settlers in america. america was settled 30,000 years ago by asian people. they are

GCSE Revision - . past paper reading higher. section a. questions and answers in french the instructions are in french

GCSE Revision - . q. two dice are rolled together and their scores added. the probability that their sum will be 2 is. a.

GCSE Revision Skills - . lo – to explore some of the ways that history revision can be done at independently. things to

GCSE Spanish Revision - . el once de abril. what are the 9 subtopics?. food and drink relationship and choices free time

English GCSE Revision - . section a - reading. there are essentially 5 reading questions as q1 has two parts. you are