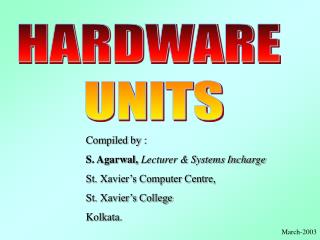 Hardware - Lesson 1. hardware. hardware is all of the electronic equipment that a computer includes. if you can touch it,

UNITS! - Ev. kilograms. units!. joules. m/s. most physical quantities have units. you are probably already aware of the

UNITS - . by cassandra piening. what is a unit ?. it is a type of medium-density housing that is usually found in

Units - . we discussed standard units like the meter for distance, seconds for time, and gram for mass today we will be

Metric Units A.K.A. (SI) Units - . we will study both the american and the metric systems for the following physical

Units - . definition : the standard measure of each kind of physical quantity is called a unit. measurement:

Units - . the energy stored in a capacitor is dependant on the capacitance and the square of the voltage developed across

Units - . warm up. why do people and scientists measure things? what are some measurements that you use in your life?.

Intro to Computer Hardware - . computer hardware. hardware – the physical parts of the computer system that you can see