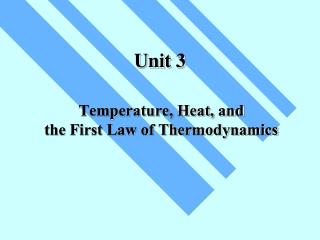 Unit 3. Temperature, Heat, and the First Law of Thermodynamics. You heat an object. It gets hot. Heat Capacity (cal/K, or J/K). Specific Heat (cal/g · K, or J/kg·K). Absorption of Heat. (add heat to it). (temperature increases). By definition of heat, the specific heat of water is