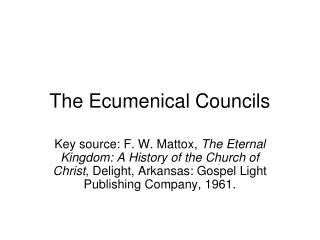 The Ecumenical Councils. Key source: F. W. Mattox, The Eternal Kingdom: A History of the Church of Christ , Delight, Arkansas: Gospel Light Publishing Company, 1961. Ecumenical—Universal or world wide in extent It applies the first seven church councils to which all bishops were invited. The Ecumenical Councils - . “christianity’s roman holiday, or, how we stopped worrying about being jewish &amp;

The Ecumenical Catholic Age - . 325 to 787 a. d. it represented 7 major church councils that formulated

Ecumenical service - . for creation time 2011. with thanks to the following for supplying photos:. christian ecology link

THE RESEARCH COUNCILS - . office of science and technology

Third European Ecumenical Assembly - . the light of christ shines upon all. hope for renewal and unity in europe. an