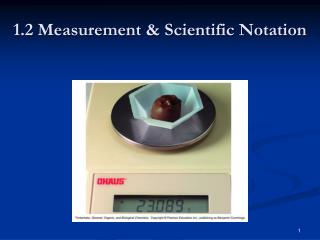 1.2 Measurement & Scientific Notation. Measurement. You make a measurement every time you Measure your height. Read your watch. Take your temperature. Weigh a cantaloupe. Measurement in Science. In science and allied health we Measure quantities. Do experiments.

Physical Science - . mr. ikner part 1. in scientific notation, how is the exponent affected when the decimal is moved to

Measurement and Psychometrics - . pm 515 jenifer unger ping sun. why is measurement important?. how do we assign a value

Finding the Measure of Clock Angles - . 1.2 measurement of segments and angles. there are many ways to find the measure