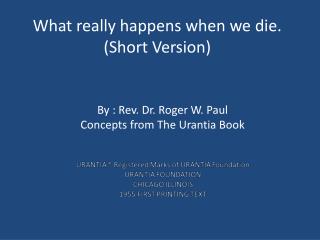 What really happens when we die. (Short Version) What really happens when we die. (Short Version). By : Rev. Dr. Roger W. Paul Concepts from The Urantia Book. Have you ever wondered what happens after you die?

What really happens when we die. (Short Version)

Before I Die - . abby mcfarland 7 th period. my career goal is to become a rn nurse and work in labor and delivery like

KS2 Version - R. remember and use facts from your lessons. use important names, dates and words in your work. describe

HEAVEN WHEN WE DIE? - . does the bible ever say that we go to heaven when we die? has anyone ever been to heaven? what

Very Short Dispersed Repeats - . also, palindromes. what are they?. short sequences (between 4 and 13-ish nucleotides)

H. Implementation Plan - . using your action plan. organizes/records your sw pbis process keep a record of what has been

Would you rather…? Version 2 - . april 2011. kindly contributed by charlotte o’brien , northampton college. search

Roger Logue - Love and war… a perfect marriage? roger logue landing at anzio john logue in his dukw on the grand canal,

Important Medical Event (IME) list - . updated to meddra version 13.0. what has been done since version 12.0?. drafting