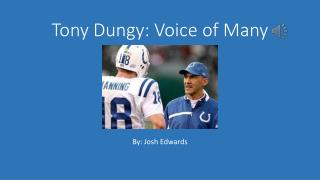 Tony Dungy: Voice of Many Tony Dungy: Voice of Many. By: Josh Edwards. Background. Born October 6, 1955 in Jackson, Michigan Son of Wilbur and Cleomae – both teachers One of four children Evangelical Christian Attended the University of Minnesota to play football

Tony Dungy: Voice of Many

National Representative 2012 – 2013 Ways to Engage &amp; Increase Male Membership - . by the end of this workshop

Memoir Unit Book Choices - . collection one we all need somebody to lean on. zlata’s diary: a child’s life in

Preparing for the SAT Writing Section - . the essay mr. neff. question of the day. what do you think?. today’s plan.

Voice Browsers - . generalmagic demo. making the web accessible to more of us, more of the time. sdbi november 2001,

Presbylaryngis: The Aging Voice - . by karen vanderploeg. prevalence/age of onset. the san diego center for voice and