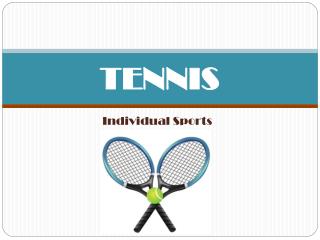 TENNIS. Individual Sports. HISTORY. The history of tennis dates back several thousand years (12 th /13 th century) Tennis originally was known as “lawn tennis”, and formally is still called that in Britain, because it was played on grass courts by Victorian gentlemen and ladies.