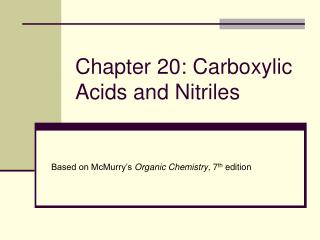 Chap 18. Carboxylic acids and their derivatives. Nucleophilic substitution at the acyl carbon - . 18.1

20.12 Amides - . physical properties of amides. amides are less reactive toward nucleophilic acyl substitution than other

Acidity of Carboxylic Acids - . carboxylic acids are weakly acidic one of their most important properties. 20.4 acid-base