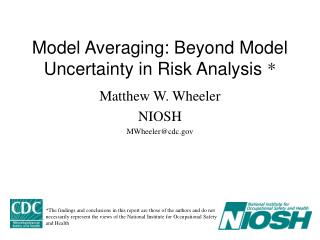 Model Averaging: Beyond Model Uncertainty in Risk Analysis *. Matthew W. Wheeler NIOSH MWheeler@cdc.gov. *The findings and conclusions in this report are those of the authors and do not necessarily represent the views of the National Institute for Occupational Safety and Health. Cost-Volume-Profit Analysis: A Simple Model for Evaluating Decision Options - A model is always an abstraction. it is a

UNIT II - . queuing analysis. do an after-the-fact analysis based on actual values. make a simple projection by scaling

The Keynesian Model - . the multiplier, the paradox of thrift, savings and investment, fiscal policy, and the tax